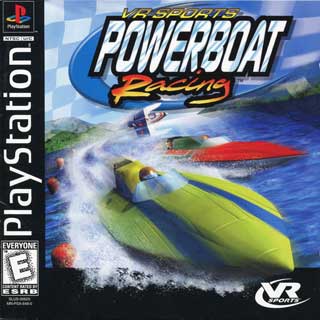 Imagine a year. Any year. Were you thinking 1998? Yeah, me neither, but that year brought in the joy of Virtual Reality to your PlayStation with the release of VR Sports Powerboat Racing. It had everything. Powerboats. Races.

Imagine the year right now is 1998. The Soviet Union has done absolutely nothing in the last few years, scientists cloned a sheep the year before, and Interplay's internal sports division is called VR Sports, because graphical capabilities of consoles are so good, they're just like virtual reality. You know, back when we had all the hit consoles like the Virtual Boy and the 3DO. I mean, both were discontinued a few years before this game came out, but that never stopped us from experiencing cutting edge technology and moving on to this game.

Like my faith in finding my old GameBoy Advance SP, the VR Sports brand was killed off unceremoniously, and renamed to Interplay Sports in 2000 with barely anyone not working in the industry knowing, or more importantly, caring about the event. Before their untimely rebranding, VR Sports released the most exciting games imaginable, such as Golf, Baseball, Football, Soccer, Baseball 2000, Tennis, Deep Sea Fishing, Baseball 99, and Powerboat Racing. You can just sense my enthusiasm leaking through your monitor, like a stick of salted butter stuffed into a CRT outside in the sun.

You'd be surprised to know that the game does not start off with good impressions. After a fairly lengthy loading screen, you get moved over to this title screen, which shows off a water wave filter on the background texture, and absolutely nothing else being enthralling in any foreseeable future. It's got all of your standard options, except for Multiplayer, which is hidden if you didn't decide to play this game with a friend. Now this might shock you, but I do actually have friends. If I felt like having fun with them and a bad game, I would get a bunch of alcohol and load up a copy of Sneak King. This game? It's one of the few games I have that I would never let a friend of mine play for a simple reason: I'm not a sadist. While I could pretend to be two people to show off multiplayer, the charade is kept up for only so long, it's not worth it.

The first thing I'm surprised about is that the box says that the game uses memory cards, and it does, but it also uses a password system instead of saving your progress to said memory card. The only excuse I can think of for this is the game developers realized that nobody would play this game for more than 2 hours. They're not wrong, per se, considering I gave up after playing it for 75 minutes, but by then I've already seen most of what the game had to offer, with its 9 tracks and weird boat selection. Let me explain.

The best way to summarize how revolutionary the gameplay is would be like introducing a half-eaten can of beans would have been like then. It's not revolutionary at all. It's as generic as it can be. You get two speed modes with 8 boats each, which is best summarized as 50cc and 150cc in Mario Kart, but you can only choose Mario in 50cc and Bowser in 150cc. You can't have boats from the faster mode in the slower mode and vice versa, the game isn't designed for that. Oh, and for good measure, the second mode is locked behind a password that you get after playing the game some. If it wasn't for that password, I'd have played both modes and not added any extra time to my gameplay. Did I mention how much I really hate locking content away behind passwords if you still have a memory card? Point is, I didn't get the second cup.

The best part about the game is that I tried to play a tournament, but upon reading the manual and finding out that none of the tracks are locked behind passwords, I went through them as solo tracks. I mean, that's the way I like it, I can try out all of the content without having to sink a lot of time or boats into it.

Here's what I feel the controls are like. I've driven a real boat before. I've also only done it once, with no instruction, no supervision, and no license. I came out in one piece, somehow. Now compared to my experience of trying to control it like a car sliding around in snow, this is best summarized with this quote I pulled out of my ass like it's a rabbit:

"This game is like driving a truck through a patch of black ice except the entire road is black ice and you're hydroplaning too, because of course you are. Oh, and for good measure, your steering wheel doesn't work that great."

The controls aren't intuitive, they're not reactive, it feels laggy as hell, and the only good way to describe them is "not fun". Granted, you can't tell what the steering looks like via screenshots alone, but it's some of the worst I've had.

You can also powerslide, although I didn't feel like it was useful in any meaningful way, as well as tilt your boat's nose up and down. If you tilt it down, your boat sinks. This might be the most fun feature in this game, unfortunately, you do not actually drown and destroy your boat like you would have in real life.

You also get to control the camera angles, which have two settings: Uncomfortable, and Projectile Vomit Simulator 98. I could not play in PVS98 for long, as I felt like I was about to vomit a good half-dozen times before I turned it off a minute later. And uncomfortable shows off another great part of the game- the very narrow levels.

Seriously, the levels themselves are way too narrow, with some areas not having enough space to pass people, while otherwise, there's enough room to go past someone, but you have to take it one person at a time.

And yet, at the same time, I'd say that this game is a great example of making the most of what you have. Personally, I think the water looks pretty bad, especially how it splashes with a stretched 2 frame animation (seriously). And yet, the level art design is shockingly solid. New York has the Statue of Liberty. Norway has an active oil leak into the race, unless that's sewage. Russia's a cariacature to extremes, with crappy Soviet-era trucks driving on the other side of the road each, placeholder satellite dishes, tanks, helicopters, weird propaganda posters... and then there's Australia which has people that live way too close to the water. Yep. Kinda hard to top the rest.

To be fair, every level's interesting, just some are more interesting than others. All that's left is a level where you pass an animal farm, but we've got a figure 8 in a rich person's backyard with Monaco, if that's what you've always wanted.

Let's talk a bit about the best level in the game. That would be Japan. I feel like this was a level where the developers got inspired by Ghost in the Shell and just threw everything they could think of in relations to Japan into a single level. It's got everything that you would think of when you hear Japan, like cherry blossom trees, wooden bridges, pagodas, signs that I can't read, and giant animal balloons in a metropolis. All in the span of a minute.

This is genuinely one of the most visually interesting and possibly memorable levels I've ever seen in a racing game, the only problem is that the game this level is in is terrible. If I was a kid, I would remember this level and very little else.

Interestingly enough, the game also has variable brightness when you're flying up into the sky, when the sun shines into your eyes, and goddamnit, I can't see, somebody else, be my eyes. This is something that's only being added recently, I'm surprised what is essentially a budget game from 1998 has this.

And now it's time for the giant inflatable elephant in the room. The pop in. Oh god, do I hate pop in. This game especially is terrible with it, because it pops in a whole two seconds before you reach what used to be the edge of the world. The Earth is flat, except it's just a box around you, and nothing outside of it exists. They could have thrown in fog everywhere, but that would just look out of place unless you're trying to make a horror boat racing game.

See that image on the left? This is the Russian level with the placeholder texture for the satellite dish. And in the background, that triangle is meant to be a massive ship. About a second later, it pops in fully and the scale of it is clearly visible. That pop in honestly really bad.

Point is, graphics popping in out of nowhere sucks. A lot of games are really clever about hiding it, but this game would have you swerving nonstop if it wanted to make popin impossible. It already runs at an unstable 20ish FPS, it would work much worse if it rendered twice as much. Although, to be fair, some games now still don't have pop-in fixed. Take Watch_Dogs for example, AAA game by Ubisoft released in 2014, a good 15 years after VR Powerboat Racing. Sure, overall the render distance is much improved, but beyond those two cars in the distance, there's nothing, and if you look close enough (you may need to click on the image to see it), there's unloaded terrain, like in VSPR.

Sadly, unlike Watch_Dogs, VR Sports Powerbump Rump does not have a sequel in which you or your boat can pet dogs. Fun fact: You can actually run over said dogs with a powerboat in Watch_Dogs 2. That makes it an infinitely better game than this. Another fun fact is that performance in WD2 is much better than both of these games, so, uh... I forget what the point of talking about vehicular manslaughter was. Don't drive into dogs with boats? Is that the takeaway here?

Let's talk about the music instead. I like good music in video games, sometimes even when I don't care for the game itself. This... is not one of those games, and not just because the game SFX drowns out the music by default. This game doesn't use any form of compression, so it has to make due with redbook audio tracks on the discs. To give the game a fair chance, I listened to them both ingame and separately, as some games have amazing atmospheric music but they sound empty by themselves. Now, some games benefit from a redbook soundtrack, as it's CD-quality audio, but this music sounds like it would be perfect on an Amiga. It is better than the game, although that's not really saying much, but the actual melodies and their executions range from somewhat competent to excessively eargrating.

I've played some really bad games, and some really horrible games. This is the kind game that's not "so bad, it's good". This game is more of "so bad, it's stuck in a painful limbo somewhere between terrible and mediocre, and it just wants to be forgotten". It's an unenjoyable experience and the worst part was that the only reason I played it in the first place was the gimmick that "HEY LOOK VR SPORTS OCULUS RIFT HAHAHA". Maybe you liked it as a kid, but this is not a game that aged well. At this point, I think I've bashed it a bit too much.