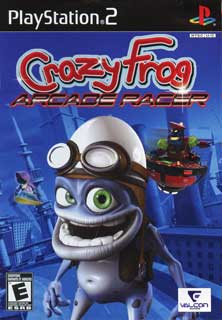 If you can remember this fucking frog, you can understand my pure seething hate for this stupid thing.

Here's my response to hearing about Crazy Frog, or the Annoying Thing, for the first time: "Thanks, I hate it."

This game is painful. It's a meh kart knockoff, but this game is PAINFUL. It should be illegal for me to own this, because I'm pretty sure the music that was made with the Crazy Frog IP was used in some shady torture chamber by SOMEBODY. To play this is to turn on something meh, but then scrape the bottom of the barrel and then put it in your mouth. And it's not a fresh barrel, there were apples in there, and now it's mouldy as hell.

For starters, let's get this out of the way. Crazy Frog had good music. The most important word out of all of these would be 'had', because 3 albums of his bullshit destroying decent tracks have made me want to kill myself in a way that can be best summarized as "mildly uncomfortable degloving". Don't look that up, it's exactly what you think it is, and I'm not going to be held responsible for you understanding my metaphor. Literally all the music in this game is remixed eurobeat mixed with the origin of Crazy Frog, i.e. pitched-up sounds of a man making an impression of an F1 racer. YOU HAVE BEEN WARNED.

For those who are observant enough to realize that this doesn't look like a PS2 screenshot, you would be correct! I've been using screenshots from multiple system. The single-player ones are from PC, while the multi-player ones are from the PS2. I would pretend to say that "I care about quality too much", hence why I'm using higher-res PC screenshots, but the actual reason was that I played this game 2 years ago on PC to the exact day of me writing this review, and I've never used the footage from it. I wanted to delete it, but I want to bash this thing's face in more. That's 10GB of storage space I'm only going to get back after this "review" goes up because I can finally be done with this annoying thing. To clarify further, I had a pirate copy of the game originally on PC and then I found an actual copy on PS2. That boxart is scanned from my own personal collection. As I said before, "Thanks, I hate it."

I did manage to get my best friend to spend 20 minutes playing it with me, to which his response was the same as my own. Then again, I don't know if he even remembers Crazy Frog, as he was humming the Gummy Bear song under his breath while we tortured ourselves for the sole purpose of getting screenshots.

You know what the saddest thing is? By show of hands, who here remembers the music videos they made for Crazy Frog? The ones that used to play on MTV. Okay, for starters, you should probably put your hand down, I don't actually have a way to see you. Second, do you see the problem with this video? I mean, it's pretty obvious when you think for a few seconds on it.

His tiny little froggy peepee offended so many people that they had to remove it, but the developers of the game didn't have the censored render that's online right now, so they had to manually blur it out. This begs two actual questions.

One- Why the fuck did Crazy Frog have a penis?

Two- Who got so offended at its presence that they decided to complain?

You'd think I'm more upset at the second question, but it's not my train of thought at all. I'm okay with him being censored, but, like, why model a penis on him in the first place?

After doing a bit of half-assed research on the topic, an actual answer popped up for the second question. Around the time he was being marketed to hell and back in 2005, a lot of his ads were on children's channels. Like, A LOT of them. In fact, at times, there was up to a 1 in 6 chance of them being during the same ad break. No wonder people found The Annoying Thing, well, annoying, plus seeing him that often must have made parents notice the fact that he had his widdle cock and balls on him, which is a pretty big no-no when little Sally's watching Blue's Clues. Hence the complaints.

So, at some point, I was actually thinking of talking about the game. The game itself feels to be a mix of Mario Kart and Wipeout, if that makes sense. It's very colourful, it's very fast, and it's a surprisingly competent racer. The gameplay is not good, however, because while it does give you the sense of speed, you also handle like you're on ice. A lot better than some other games I've played, but slippery as hell, too.

It's got a surprisingly decent varied cast, although there's three copies of the Crazy Frog in it. But it's okay, because it has Miguel, the greatest chef known to man. (Shown on left) All of the characters are fairly well-animated, even though the animation by itself is pretty simple, and it just works, I guess.

Honestly, the big weakness of the game isn't the uninteresting powerups, or the fact that it's a slippery mess. It's the fact that the track designs are just... uninspired. Sure, they bend every way they can, but the levels just don't have a sense of quality to them. You're not going to be remembering the levels you're on, but you will remember the fact that this game was a racer that I would call 'fun'. Granted, by 'fun', I mean that as "it's far better than it has any right being a Crazy Frog game".

And yet, the game is a hollow shell. It's not a very interesting game outside of Miguel's presence. Outside of the actual racer, all it has are a couple of terrible minigames and the two music videos it came with. There's not a lot of tracks, not a lot of good or memorable features on it, and the game is on a CD. A PS2 game from 2007 was printed on CDs. I didn't even know PS2 games could have been recorded on a CD in the first place, I thought the DVD presence was a necessity.

Here's the thing, if Crazy Frog was removed from the game, as well as all of his branding and music, and the levels improved... well, it would be an enjoyable game. I've fallen off too many times to the bullshit level design to actually think much of the game, but it's not the kind where you think that the developers wanted you to suffer. This game is closer to "they didn't care, and honestly, neither would anyone, because we're all getting paid on Little Timmy's allowance anyway". This game just doesn't have a reason to exist the way it does right now, and that's the saddest part about it.

Back on the topic of Crazy Frog's penis, the most insignificant thing in all of this (that I spent way too much time focusing on), is that even though the froggo himself was censored, the robotic doppelganger wasn't. Weird.

I believe that after playing this game and having it on my mind for 2 years, I may now finally qualify as being legally insane. I've been arguing with an imaginary audience about a thing that hasn't been relevant in over a decade, and honestly, the only person suffering from the presence of Crazy Frog now? It's me. I need to burn it. Every copy.

Hey, if I complain to the ESRB about a blurred out penis and an uncensored one, will they request a recall of every copy of the game? That might help my quest, my new final fantasy.