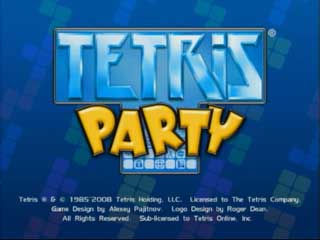 You know when you sometimes have that feeling where you know you should be doing something but you keep putting things off and then you realize you kind of screwed yourself into a corner? That's what choosing a Tetris game as a target to review is like, because how would anyone even be able to review Tetris? More importantly, why would you review Tetris? Especially the version that came out digitally and not the deluxe edition released in stores later? Good question, to which the answer is "I don't have the physical copy". I do my best when I can, but all I've ever owned is the WiiWare version. And that's what we're stuck with.

Tetris Party is a game that you probably should own if you like WiiWare games. However, liking WiiWare is getting to be quite difficult for the simple reason that is Nintendo shutting down the Wii Shop Channel. Sadly, apparently keeping a few servers up with very legacy code running on it in the background is now too difficult for Nintendo, so they've announced the end of the Wii Shop Channel in January of 2019. Or maybe it's GDPR violations. Or both! The more difficult part of this process is that you can no longer get Wii Shop Points, so if you don't have 1200 Wii Points right now, you're never getting this version of the game on your Wii, at least not legally.

So, this is now the first game that I have that is going to be unable to be obtained in a legitimate form easily, and this is the most annoying part of the game. I understand that some games need to be taken off the market for licensing reasons, such as Alan Wake. Some games end up better unpatched because the owners didn't take it off the market, like Grand Theft Auto IV, in which an update replaced a lot of iconic music of the game with much weaker tracks from no-name artists. And then there's this game, which you will need to find a Wii with the game already purchased to be able to install it, and in a few months' time, you'll need to find one with the game installed, or else you can't play it. So, uh, have fun, guys. I know I sure am going to. This thing about the game having to be installed isn't just exclusive to Tetris Party, this affects all the WiiWare games, both good and bad. Mostly bad, like the Wii's library. The only way this game is any sort of exception to the WiiWare rule is because Tetris Party Deluxe is a thing, and you can probably find copies of that far easier.

As for the actual game itself, it's, well... Tetris. If you have no idea what Tetris is, I'm more shocked as to how you ended up on a review for a version that I haven't seen mentioned in a decade. The basic game mechanics are shapes try to make a building, but every time you finish a floor (line), it disappears forever. As per modern Tetris rules, the game allows you to hold a piece as well as see a shadow of where your piece is going to go.

Of course, because bog-standard Tetris has been around for over 20 years at this point, nobody's impressed with that any more. And for 1200 Wii Points, this wouldn't be worth it. So the employees at Hudson Soft came together for a meeting. "Let's just throw some more modes on it, maybe people might buy it then", an employee said. And he was right, as Tetris Party was designed for local multiplayer in mind, with a number of modes in case players get lonely and happen to be bored with the good old Tetris experience.

Losing the easiest game of Tetris ever made.

The game has single player, multi player, and my favourite, beginner's Tetris. The last one is great if you're 5 and never played a game before, as the blocks are made out of very simple shapes, and the board is only 5 blocks across. This is essentially an endless marathon for anyone who even mildly knows how Tetris works. My first attempt at playing it in years led me to a 17 minute marathon where I cleared 550 lines (and the entire board completely a dozen and a half times), it's stupid simple, but it's fun. There's nothing unexpected, nothing overly complex, if you want a child to learn how to play Tetris, you can either have them suffer through the main game like many others or show them this as a tutorial. And then you never touch it again.

The multiplayer in this game is allegedly really good, but I can only write about what I played, and I don't have any friends who want to, or people I pay money to play Tetris Party with me. So, uh... at least it requires just one console? I'm seeing a lot less games work in split screen, honestly, so this is somehow a selling point now.

Single player is where enough of the meat of the game is. There's five modes available right off the bat, and none are hidden behind passwords like SOME GAMES. You get Marathon, Computer Battle, Field Climber, Shadow, and Stage Racer. These are all really easy to understand.

Marathon is good old standard Tetris. You can make it to level 15, or set it to endless for you to rack up a high score. There's nothing special or unexpected about this mode, it's good old Tetris done right. Every Tetris game has to have Marathon in some form, it's a bad Tetris game otherwise.

Computer Battle is pretty simple to understand as well. This is essentially the standard modern multiplayer, but against a computer instead of a human opponent. Clearing lines makes incomplete lines appear at the bottom of the other player's screen, pushing up the rest of their blocks. Ideally, this makes them hit the top before you do, otherwise, you've lost. Not a very special mode, at least not to me.

Literally unplayable.
(Even if you hold, you fuck up)

Field Climber would have been my favourite mode in this game. The premise is that there's a small stick figure that needs to grab all the flags and reach the top of the level. He can climb up the height of one block and the game is pretty forgiving about not murdering him if a block falls on him, but if it's obvious you're trying to kill the little guy, he ends up dead. It's the only mode where you have to avoid making lines, but just making a path. Seems simple, right? Well, after level one, it's kind of clear why I don't like this mode. It all depends on RNG. I've ended up starting in situations where you have no good option that doesn't involve you losing one way or another. Sometimes, getting the flags ends up being an example of suffering rather than enjoyment, as they're thrown around completely randomly, and sadly, it's just not worth it. This has potential, the execution is just really off.

Shadow is another interesting mode. The premise is that a shadow is overlaid on top of the playfield. Your job is to land pieces so they cover up 100% of the shadow and try not to go out of bounds. It's also RNG dependent, but it's a lot more manageable. There's a fair assortment of levels too, but I feel like they could have made more. I liked this.

Stage Racer is you being a single block and having to rotate your way past a stage. So, let's say you're an S shape. The level's going to have twists and turns that you should be able to pass. The goal is to get through the given stage as fast you can. This too is pretty uninteresting of a mode, especially if you had a "9999 in 1" block game that had this exact concept too. The pieces don't get stuck to walls, which makes this mode done fairly well, but what does it matter if there's only a dozen levels? It's doable in under an hour. A great proof of concept, but like Shadow, it's not enough content.

At this moment, he knew, he fucked up.

But modes don't make a Tetris game good. It's just extra content for the sake of content. The most important part of any game is being able to play it, and Tetris Party does not fail in this regard. The game's controls are very snappy and responsive, and it's easy to pick up and play. Additionally, the game also has no framerate issues whatsoever. This sounds really stupid to write, but sadly, with Ubisoft's dreadful Tetris Ultimate game, this needs to be said. Due to a bug involving having a large friends list, and the game updating their status constantly, their port of Tetris was plagued with huge performance issues on the PlayStation 4. Their game came out in the end of 2014. Thankfully, this isn't a Ubisoft game, and it has no problems running on the Wii whatsoever. It's Tetris done right.

As for the music, they're techno remixes of the classic tracks like Korobeiniki and Kalinka for the marathon modes as well as some newer, original compositions, such as Henry's Knight for the Field Climber mode. It fits with the aesthetic perfectly, and I'm impressed with what the developers brought to a WiiWare game, considering Nintendo had a hard 40MB size limit for all developers. It's mixed fairly well, it doesn't grate too much, and has long loop times, with more than enough variety for all the different modes to have something to work with.

So, yeah. It's not perfect, and no game is, but it's the proper experience of Tetris on your Wii. If you have a friend over, the multiplayer modes might end up being very interesting to play as well, and other reviewers' say that they're solid. It's a good time overall, and the presentation is excellent. Overall, I'd recommend the hell out of this game, but only to the point that this game should never be allowed to die. Grab it if you can, and want a copy of Tetris on the Wii, because this version of the game is going to disappear in a few months and end up being a rarity on people's old consoles sold at garage sales. Or just buy Tetris Party Deluxe. It's apparently the same game.